A CLOSER LOOK: "THE SUN AND THE SET"

Metro Pictures is delighted to be working with Latifa Echakhch, the latest artist to join the gallery. It was announced in January that she would represent Switzerland at the next Venice Biennale, now scheduled to open in 2022. Also in January she opened a sweeping survey of her work at BPS22 Musée d'art de la Province de Hainaut in Charleroi, Belgium. Titled "The Sun and the Set" (on view through August 16) the exhibition offers an opportunity to discover Echakhch's distinctive vocabulary and to follow the threads that have tied her paintings, sculptures, and installations together for more than fifteen years.

The Moroccan‑born artist conceived a kind of meandering course past large, partially collapsed theatrical backdrops suspended from the high ceilings of the museum's Grande Halle. Walking along Echakhch's informal path from one spectral scenographic set to the next, visitors encounter more than seventy other sculptures and installations made throughout the artist's career. These works comprise recognizable objects, often imbued with symbolism, that she then subtly modifies to unburden them of their reified use-values. In another gallery, she installs three large-scale wall works along with pedestals supporting various small objects—sealed envelopes, a handkerchief, a collection of seashells—soaked in ink. In this dramatically lit room, the objects and pictures become ghostly variants of themselves, recalling the memories of their bygone personal and political efficacies. Absence is pervasive throughout this retrospective and indeed throughout her practice. 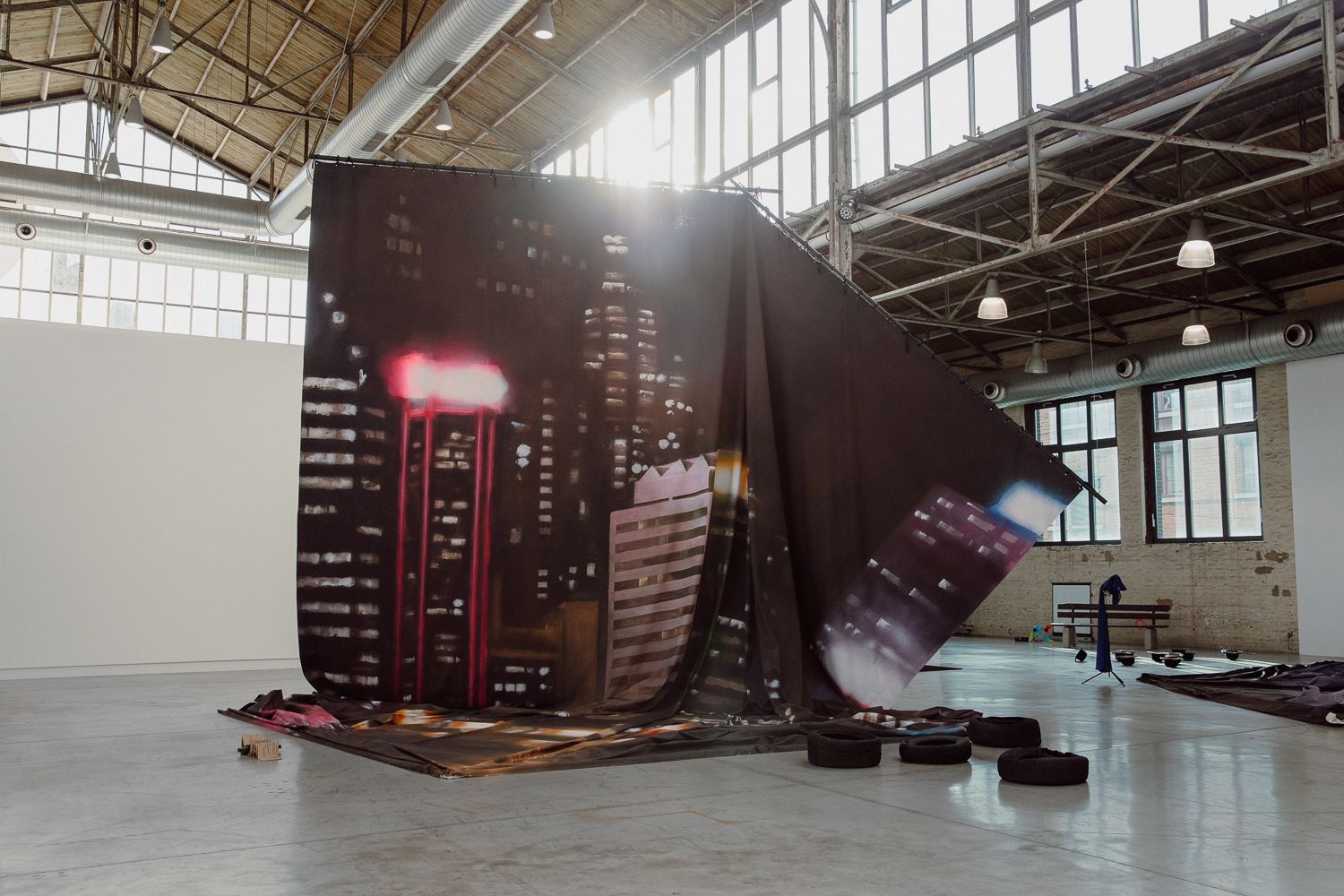 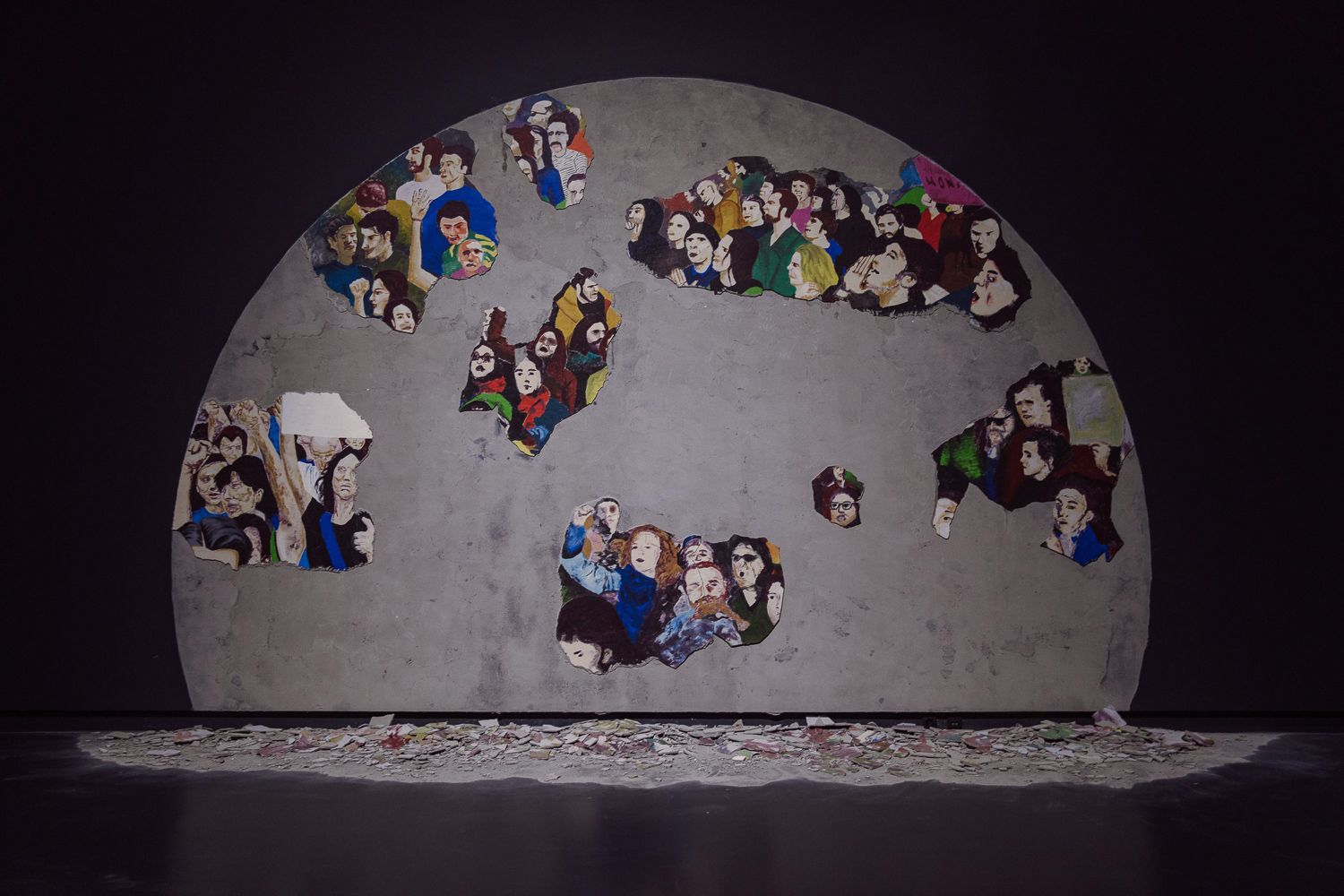 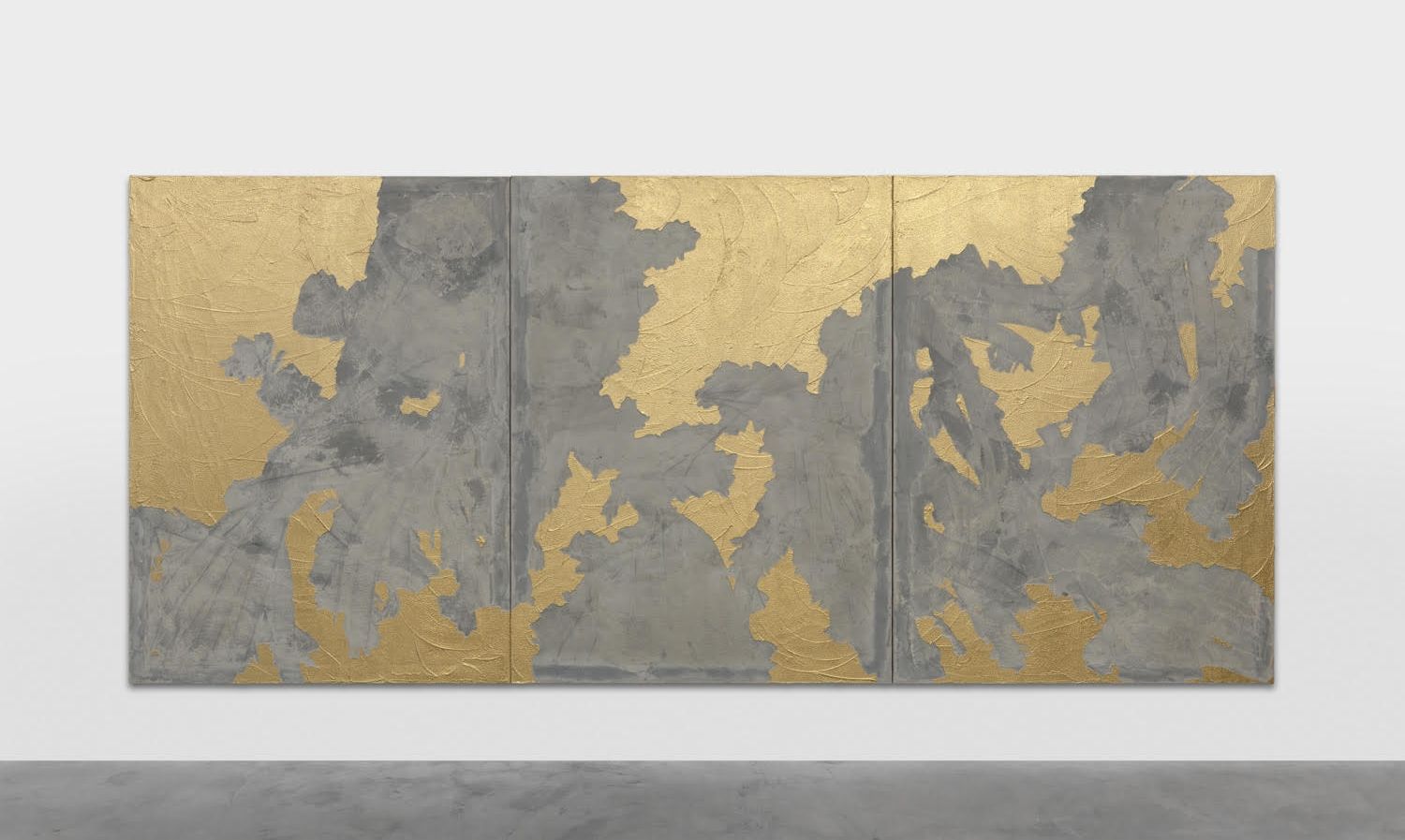 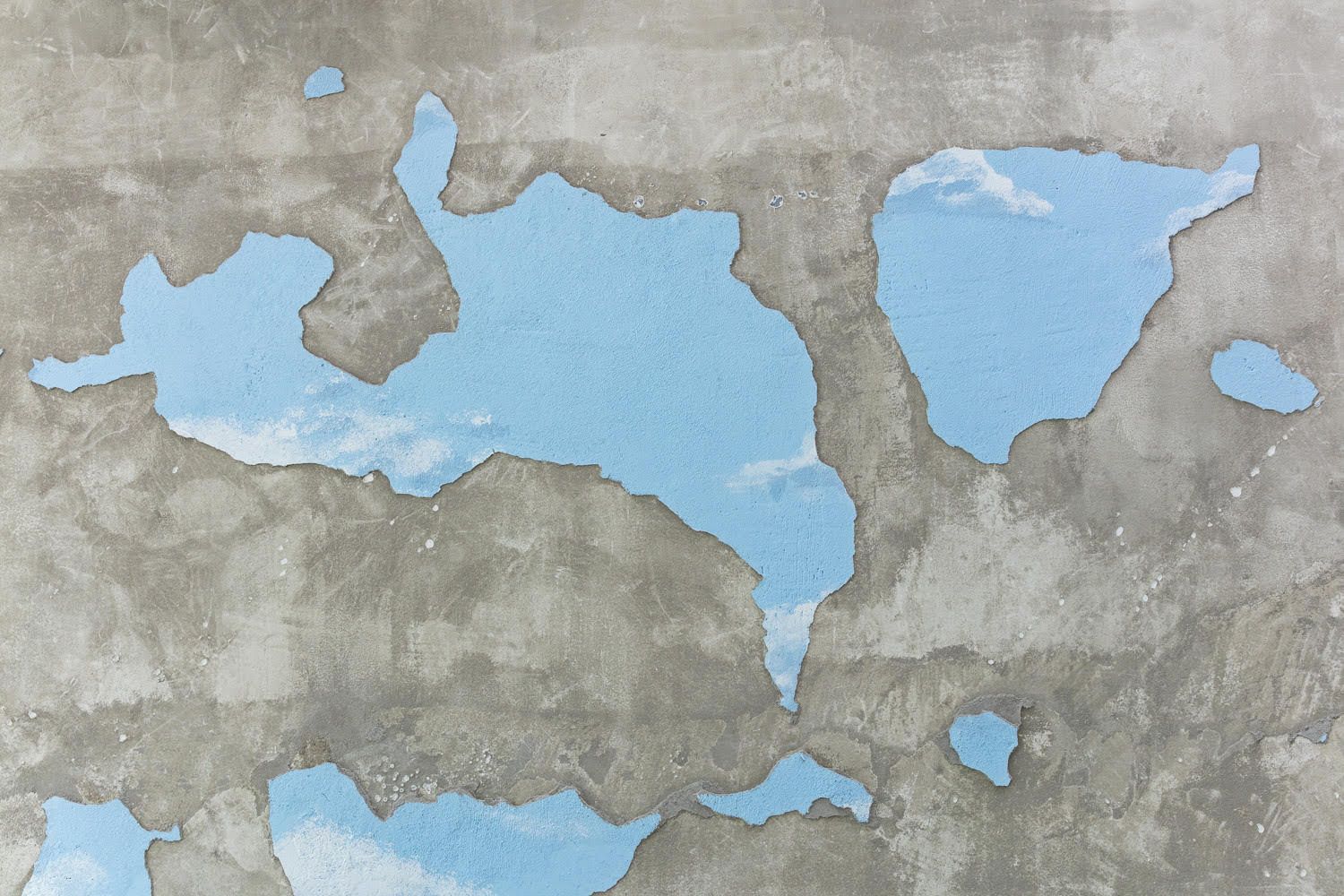 Above is the most recent iteration of Echakhch's Crowd Fade. Earlier versions were installed at the Swiss Institute, New York, in 2018 and at Istanbul Modern on the occasion of the 15th Istanbul Biennial in 2017. In each location she works with a muralist to make a fresco based on reportage photographs of protestors. She then chisels away at the finished image, leaving only fragments on the wall and chips of plaster on the floor. With no indications to locate the pictured demonstration, the work inevitably conjures protests specific to the time and place where it is exhibited. In the same gallery at BPS22 she also presents Cross Fade, a related wall painting in which the sky appears to be falling off the wall. The motif of the falling sky recalls her work La dépossession, a painted theater backdrop of a cloudy blue sky that seems to be crashing down from the ceiling, which she has presented in exhibitions at the Centre Pompidou after winning the Prix Marcel Duchamp and at at Museum Haus Konstruktiv, Zurich, when she was awarded the Zurich Art Prize.

In her most recent series, Wind Wall Icon, completed after the opening of "The Sun and the Set," she employs a strategy similar to the one used to produce Cross Fade and Crowd Fade. These paintings evoke the Japanese folding screens called byobu, translated as "wind wall." Byobu are known for their representations of cloud-filled skies and landscapes done against gold leaf backgrounds. Echakhch’s paintings simultaneously recall Christian icons that incorporate gold leafing. Echakhch first applies gold pigment to the top layer of the paintings and then chips away this surface to,reveal a layer of matte concrete underneath. This visual contrast reflects the oppositional qualities of the wind’s immateriality and the tangible nature of a wall or religious icon.

Echakhch’s interest in scenography developed when she was invited by the Nouveau Musée National de Monaco to conceive an exhibition at the Belle Époque Villa Sauber. There she produced stage sets based on details from paper set models designed by the Opéra de Monte Carlo’s scenographer in the early twentieth century. Along with these resurrected designs she presented pieces from her series Inking, consisting of clouds hung from the ceiling and just barely touching the floor. On one side the clouds are painted blue and white while on the reverse they are blackened with ink. Positioned behind them are various objects that have also been covered in ink, a material Echakhch has consistently incorporated in her work. 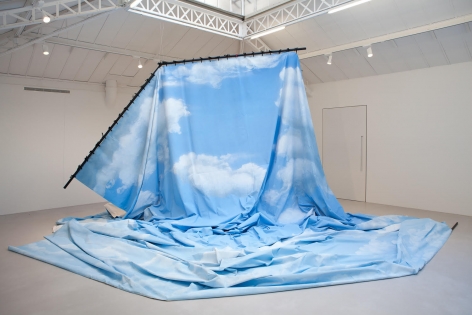 "All around fades to a heavy sound," kamel mennour, Paris. 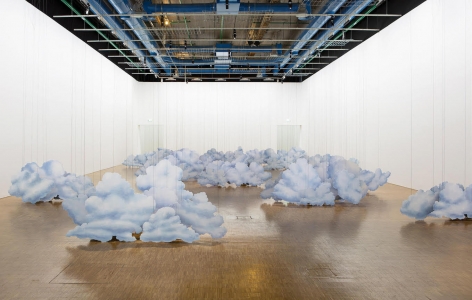 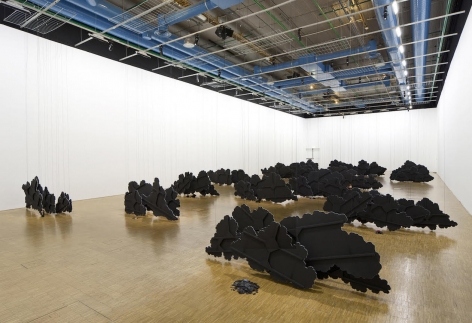 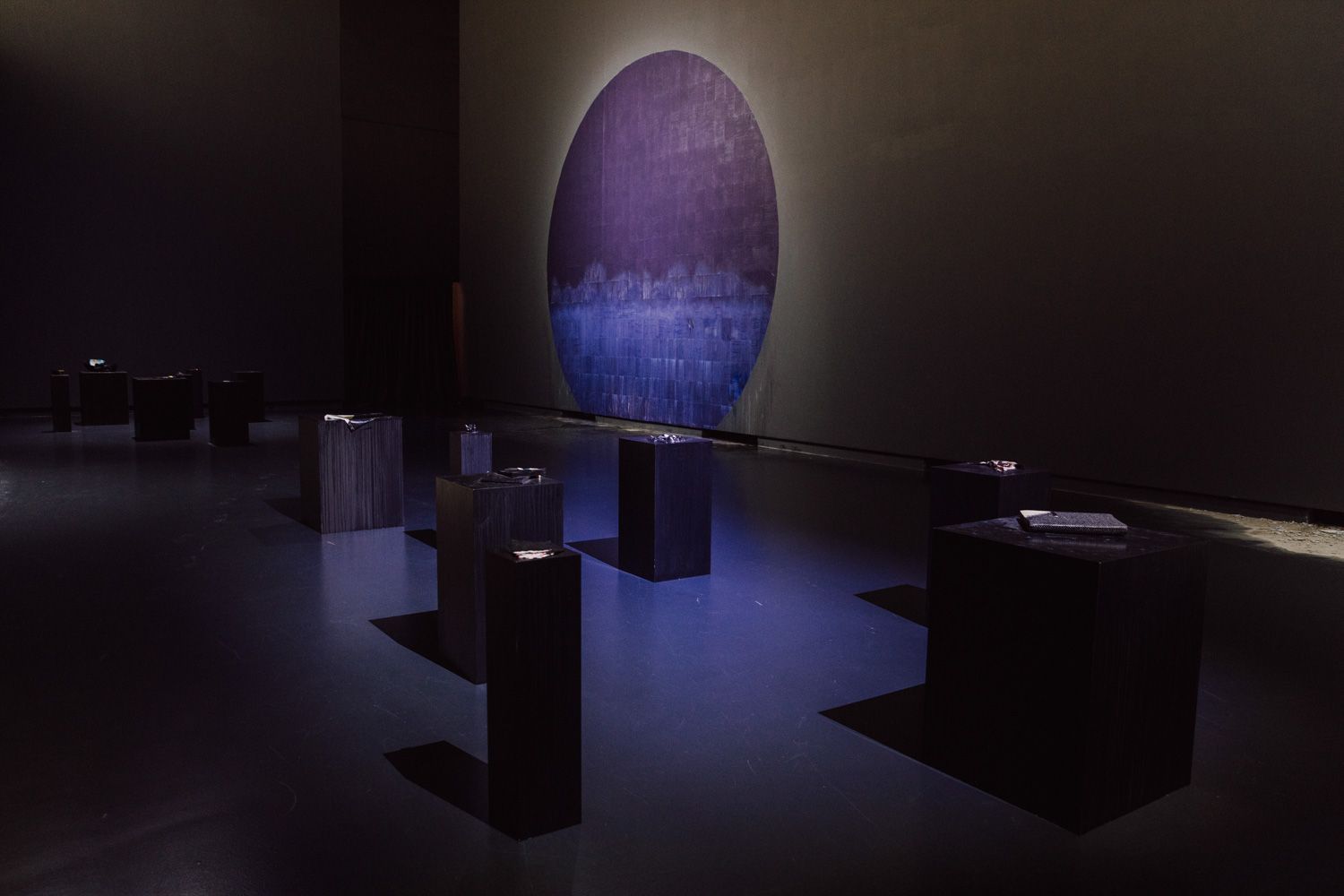 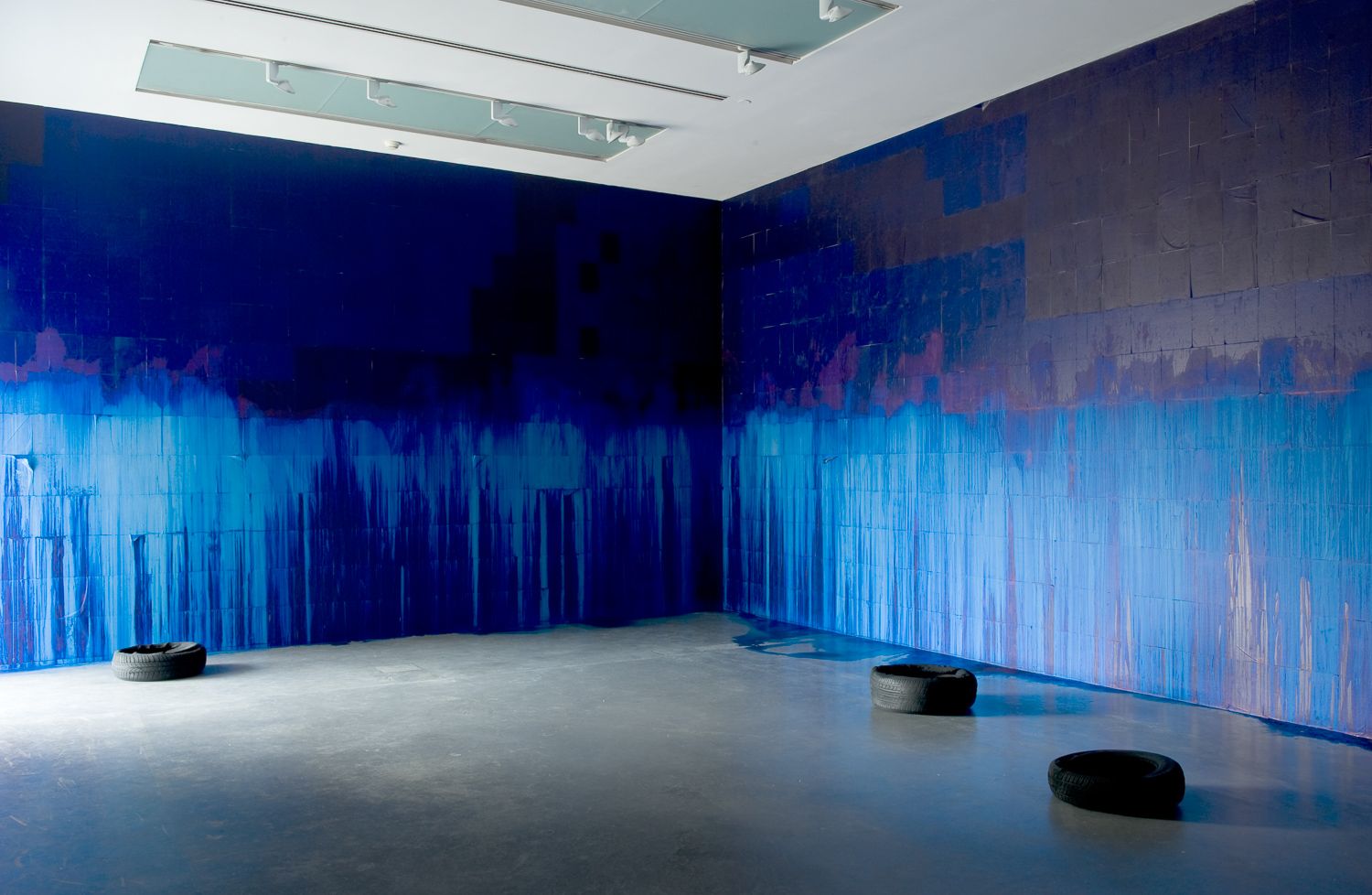 At BPS22 Echakhch installed A Chaque Stencil une Révolution [For Every Revolution a Stencil], which she had previously exhibited at Tate Modern, London, and the Hammer Museum, Los Angeles. In each iteration she lines the walls of the museum with empty sheets of dark blue carbon paper and sprays them with alcohol that then drips blue ink over the sheets and down onto the floor. The title is a quote from Yasser Arafat made in reference to the May 1968 protests in France and the anti-war movement in the United States, when leaflets promoting the ideologies of these causes were produced using carbon paper and stencil machines.

The ongoing series Dérives takes its name from theorist and filmmaker Guy Debord's term dérive, which he used to describe spontaneous wandering through the urban landscape. Echakhch produces her paintings by laying several canvases of the same size side by side to form a single surface. She proceeds to paint a distorted linear pattern in black paint over them that loosely follows the geometric ornamentation of the 16-point star common in Islamic crafts and architecture. The last painting in the row of canvases then forms the starting point for the next set of works in a series that, like the pattern she draws from, can theoretically go on indefinitely. At the Museum Boijmans van Beuningen in Rotterdam, she expanded the series from canvas to the gallery itself. There she drenched articles of clothing in ink and dragged them across the floor to create lines that, like her paintings, reinterpret the traditional ornament.

In her series Mer d’encre [Sea of Ink] Echakhch fills bowler hats with black ink and arranges them on the floor. The anachronistic hats themselves conjure such figures as Magritte and Chaplin, while the ink inside them symbolizes their absent wearers’ thoughts. They are portraits of poets or artists, whose creations are about to spill from their heads. 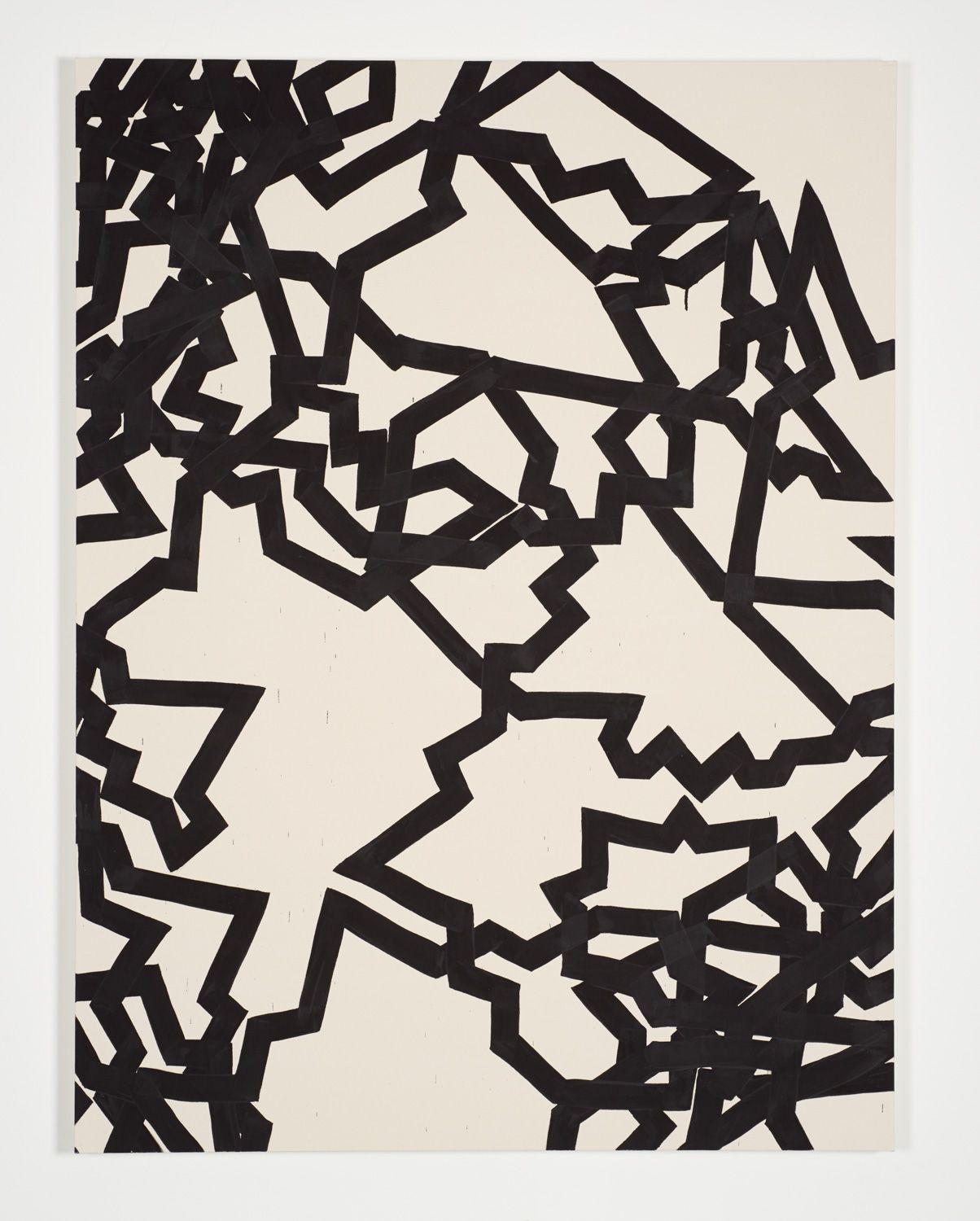 The ongoing series Dérives takes it name from artist and filmmaker Guy Debord's term dérive, which he used to describe spontaneous wandering through the urban landscape. Echakhch produces her paintings by laying several canvases of the sam size side-by-side to form a single surface. She proceeds to paint a linear geometric pattern in black ink over the canvases following the classic ornament of a 16-point star found in Islamic architecture and crafts.

follows a classic form of ornament found in Islamic architecture and crafts. the ornament is based on a 16-point star whose bilateral symmetry allows it to be endlessly expanded in any direction. the result is a series of related yet distinct and unrepeated patterns.

The last canvas in the row forms the starting point from which she then reprises the painterly process at a later time, with the series evolving from right to left. the paintings in the series, the number of which could theoretically be infinite.

In her series Dérives Echakhch

Several canvases of identical size are aligned to form a single surface. The last canvas in the row forms the starting point from which she then reprises the painterly process at a later time, with the series evolving from right to left. the paintings in the series, the number of which could theoretically be infinite. The purely linear geometric pattern in black follows a classic form of ornament found in Islamic architecture and crafts. the ornament is based on a 16-point star whose bilateral symmetry allows it to be endlessly expanded in any direction. the result is a series of related yet distinct and unrepeated patterns. 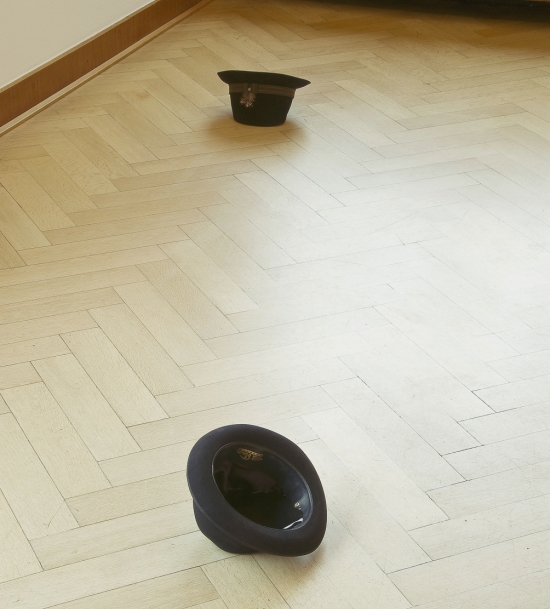 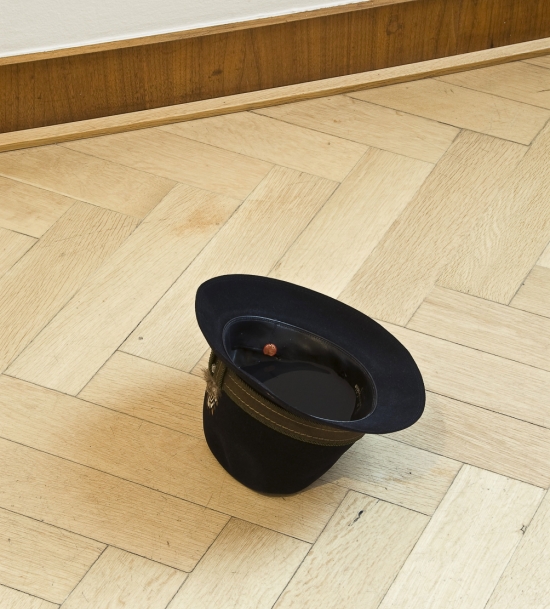