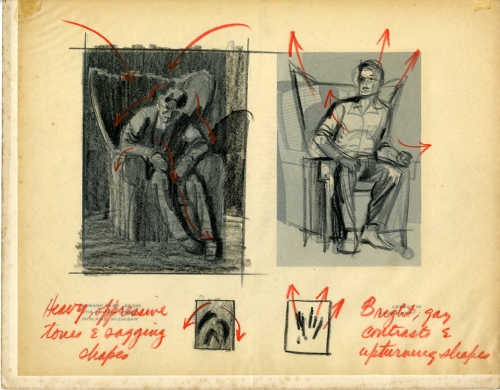 Several years ago my mother died, about three years after my dad. Following the memorial and the internment of their ashes, my sisters and l began going through their house to clean it up and root through the family photos (my dad was from Rochester, the home of Kodak, so there were a lot of photos and slides) and other documents. While digging around in the basement, I came across a box with a number of assignments my dad had completed as part of the Famous Artist’s Correspondence School sometime in the 1950s. There were also accompanying letters from the teachers critiquing the work, as well as corrective overlays. I had never known about this activity of my father, so for me, it was like uncovering a family secret. The first thing that struck me was that the pieces all received criticism regardless of how well or poorly my dad had done on the assignment. (He was much better at landscapes and design than he was at human faces and figures.) It reminded me of the way instructors at art schools have a habit of urging students to make changes to their work regardless of whether they are obvious talents or not––as if the teachers weren’t doing their job unless the students “improved.” 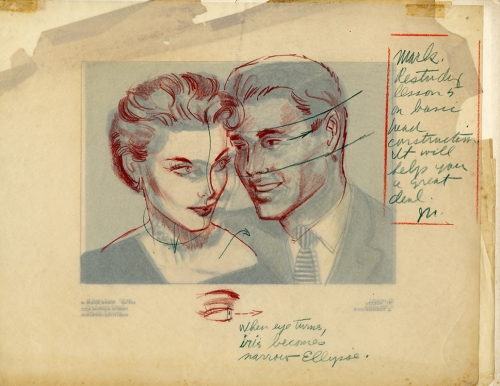 I knew my dad as a package designer for Dow and a Sunday painter who did watercolor landscapes, not unlike his father who was an accomplished watercolorist and printmaker as well as a very successful commercial artist. My dad’s watercolors had little of the verve and “modern” jauntiness of his dad’s and I’d always thought of him as having feelings of competitiveness towards his father because of his obvious talent. I assumed that he took that correspondence course in that competitive spirit. I also felt he had similar competitive feelings towards me, though I know he was proud of what I’d accomplished, particularly when I’d get mentioned in the New Yorker, which was my parent's small-town lifeline to culture. 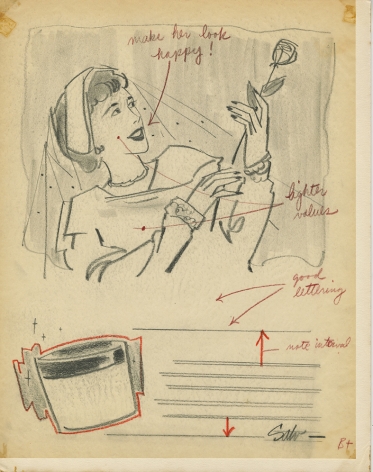 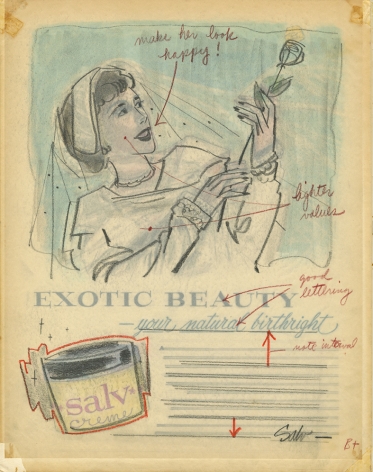 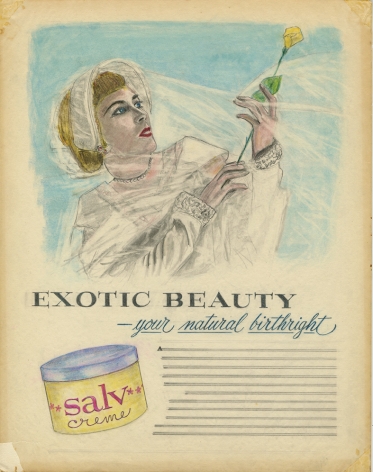 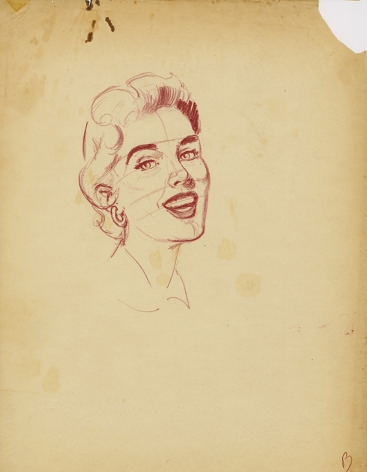 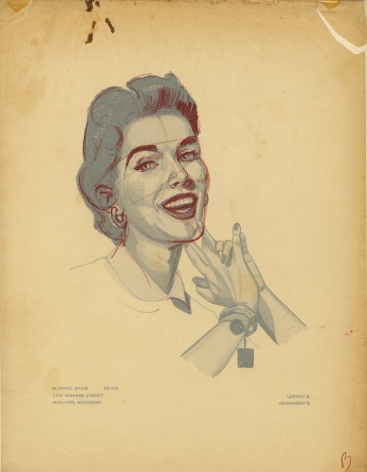 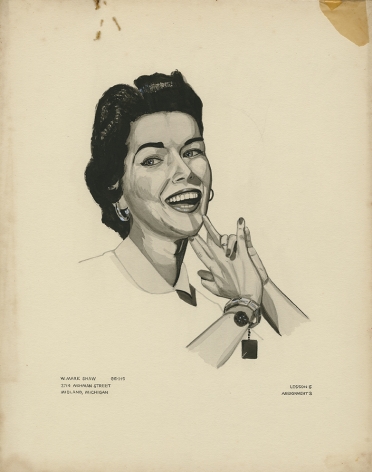 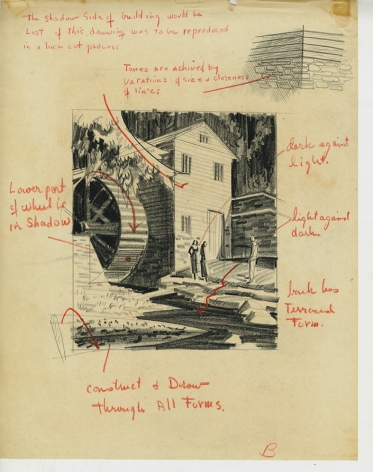 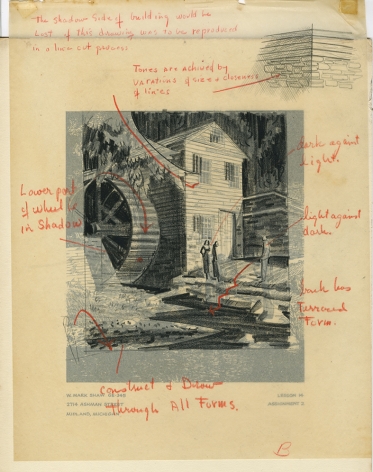 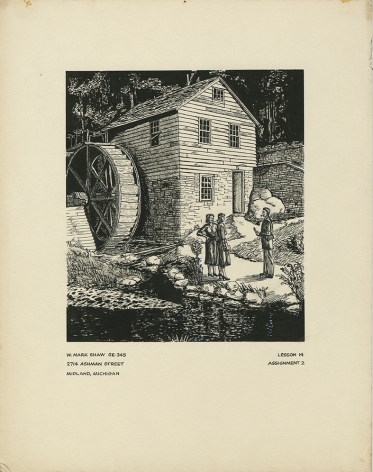 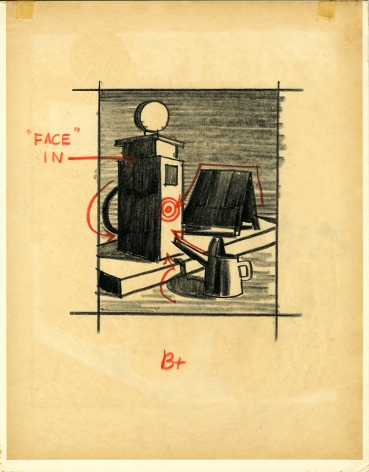 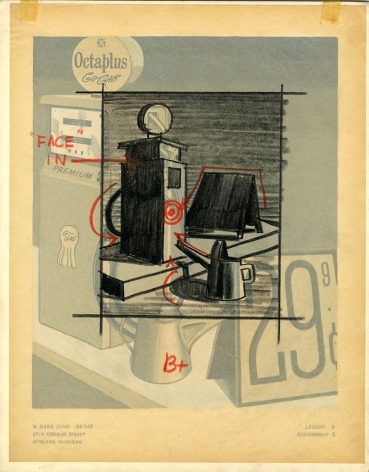 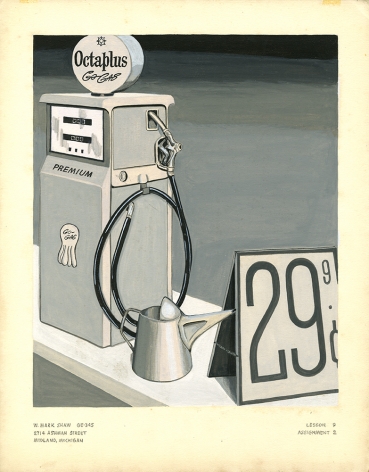 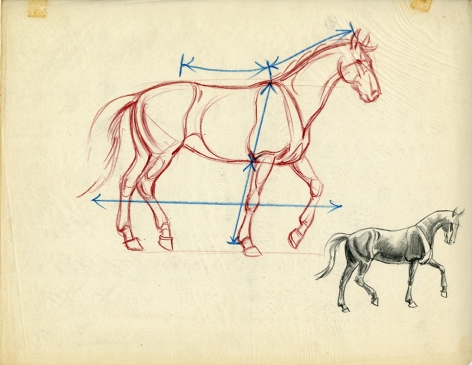 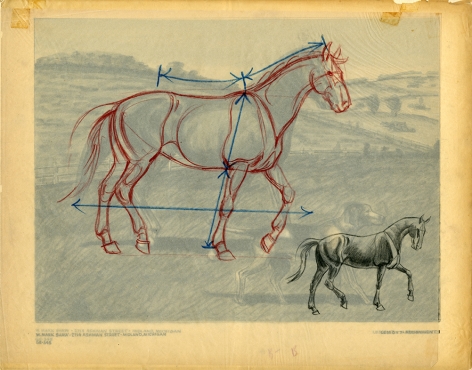 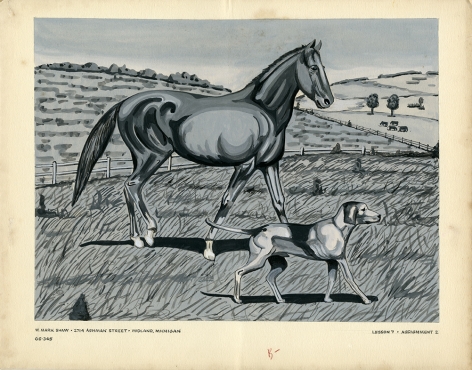 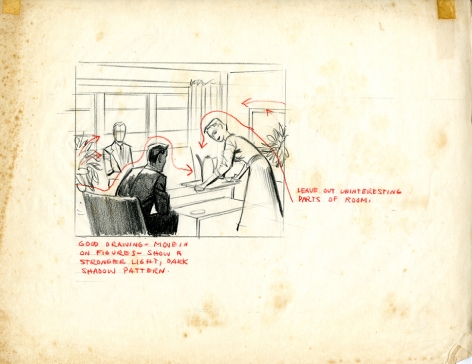 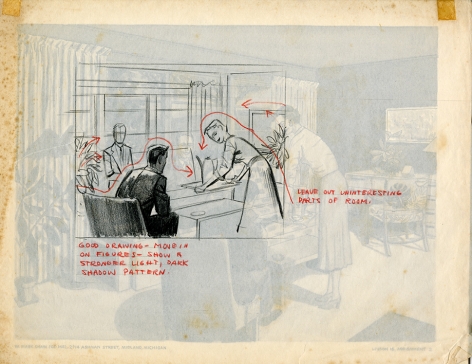 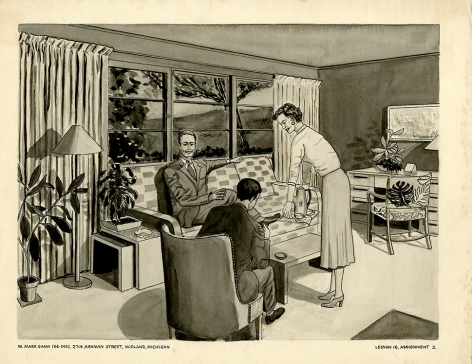 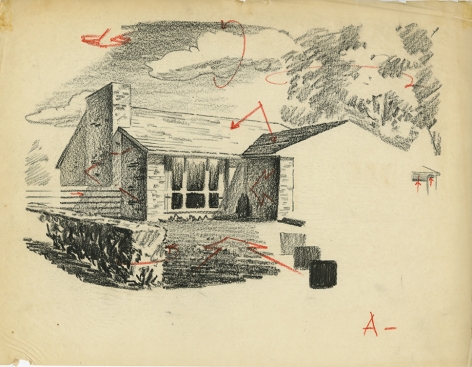 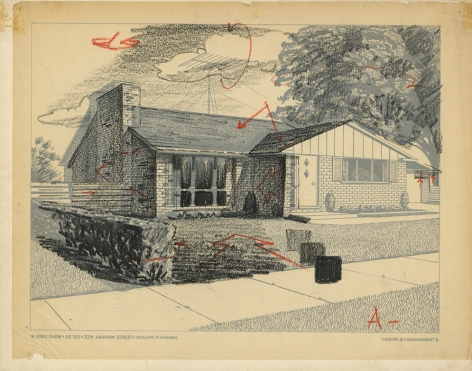 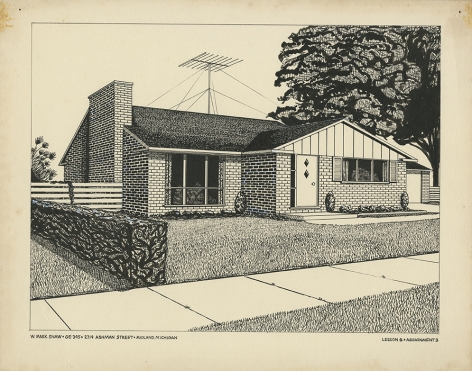 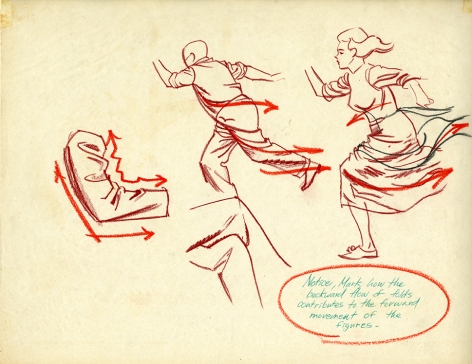 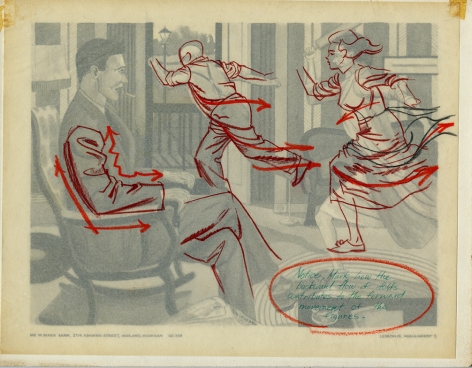 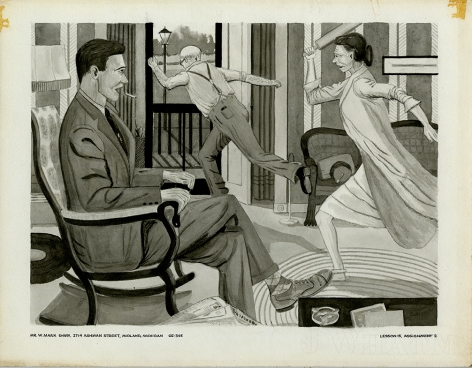 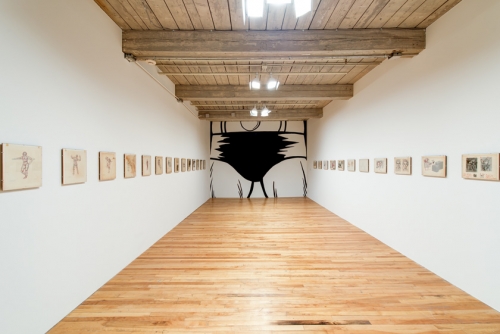 It occurred to me that I should make some corollary between our familial intergenerational competition and Superman, who to me always seemed more like a father figure rather than someone I identified with. That he seemed a father-like figure to me must have had something to do with the imposed redesign of the character by DC Comics when the original creators, Siegle and Schuster, were suing them over the copyright. Wayne Boring, the main superman artist of my childhood, was called upon to give the youthful Superman of the 1940s a wider girth and more middle-aged face. And his genital region was always rendered as a big black void. So for my exhibition at MASS MoCA, I decided to present my father's correspondence school drawings on both sides of a hallway gallery that led up to what seemed to be a wall painting of Superman's groin, but which was, in fact, a black void containing the 6 forms of Kryptonite glowing in the dark, something one would only begin to be aware of as one walked through the gallery. (There is a visual pun involving the family jewels implicit in this.) The letters from the teachers were on the back wall, along with several other pieces that meditated on various aspects of the Superman legacy and aesthetics. 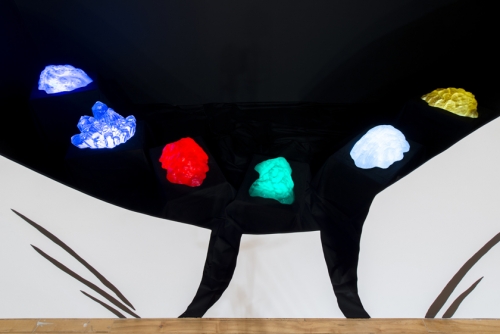 At the opening reception, I met Norman Rockwell’s son who said that the archives of the Famous Artist’s School were housed at the Rockwell Museum and included voluminous letters from the instructors. I also met a woman who said her father was one of the instructors, and that it “ruined his life.” My older sister said that she had known about the course at the time (I may have been a baby or as yet unborn) and that Grampa thought it might do him some good as there were no advanced art courses available in the rural midwest at the time. By the time I was a teen the school seemed to have devolved and you were encouraged to draw “Binky,” a Bambi like cartoon deer to evaluate your artistic abilities. One of my hippie-punk friends sent in as bad a drawing as he could muster and got a reply saying they saw plenty of talent and encouraged him to enroll. This may have presaged today’s for-profit art schools as they scramble to find enough students who can afford the ever-increasing tuition. 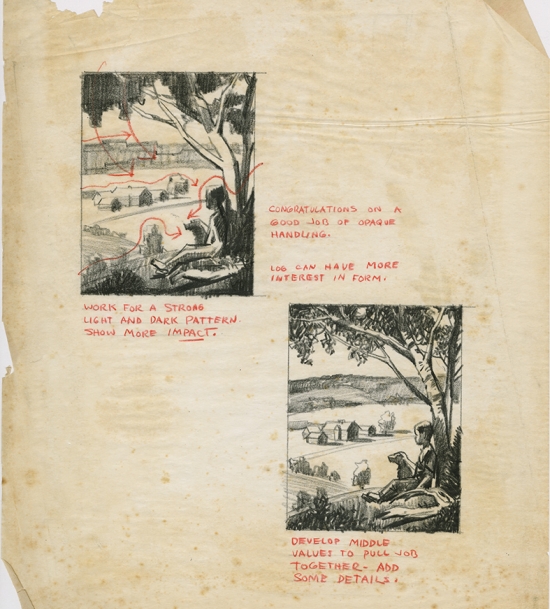 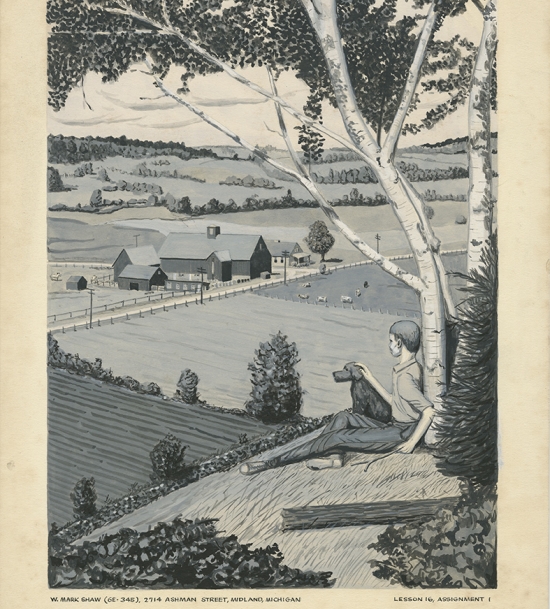 Jim Shaw was born in 1952 in Midland, Michigan, and lives and works in Los Angeles. He founded the band Destroy All Monsters with Mike Kelley in Ann Arbor, Michigan, in the early 1970s. Later in the decade, he was part of an influential group of artists, including Kelley and John Miller, who studied at CalArts. He was the subject of a major retrospective, The End is Here, at the New Museum, New York, in 2015. He has had additional one-person exhibitions at the Massachusetts Museum of Contemporary Art, North Adams; BALTIC Centre for Contemporary Art, Gateshead, United Kingdom; Museum Boijmans van Beun­ingen, Rotterdam; CAPC, Musee de’Art Contemporain de Bordeaux; MoMA PS1, New York; Magasin, Centre National d’Art Contemporain, Grenoble; Institute of Contemporary Arts, London; and Musee d’Art Moderne et Contemporain, Geneva. His work has been included in exhibitions at the Walker Art Center, Minneapolis; Los Angeles County Museum of Art; New Museum, New York; Museum of Modern Art, New York; Centre Pompidou, Paris; and the Museum of Contemporary Art, Los Angeles. He additionally participated in the 55th Venice Biennale in 2013.